Daniel Scott Tysdal: A Poet! With Hair Like a Side Full Order of Curly Fries. 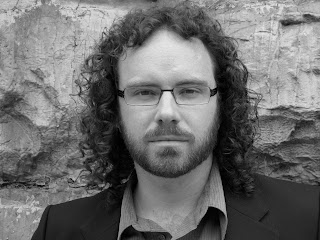 Okay, so maybe that title riffs on a theme slightly less related to movies than these other interviews have. But it's only right of us to defy your expectations while introducing you to the work of Daniel Scott Tysdal: work in which formal experimentation is a given; in which cut up photographs, chicken-scratched napkins, and YouTube stills are par for the course; in which arrows, blackout bars and instructions to "Fold" and "Cut" are not uncommon; in which Stephen Harper can appear as a haughty chair and you can still be left thinking, I want more, more, more!

Unlike our glib title, the unexpected in Tysdal's poetry does far more than just stir things up for the sake of making a cheap point. He is continuously stretching the limits and boundaries of poetic form not merely to be strange and novel and new as a poet, but rather to meet squarely what is strange and novel and new in the world that calls for, demands this stretching of form. Whether he is stretching to give depth and significance to the click-accessible pixels of an unknown man's suicide in "How We Know We Are Being Addressed by the Man Who Shot Himself Online," or to find an unlikely meeting place between hey-look-at-that! internet meme representation (i.e. LOL Chair) and political representation (i.e. Stephen Harper) in "The Chair" (featuring Stephen Harper Chair), Tysdal's experimentation is reliably stimulating and rewarding. If you doubt a poet this playful is lacking anything by way of insight, depth or heart, just check out this poem, "Mors Finis Non Est," written in memory of David Foster Wallace, on Tysdal's blog, Notes on Our Swirling Return to Ourselves.

When he isn't championing hearts and minds on the written page, Tysdal is performing the same feats in person as a professor of creative writing and English literature at the University of Toronto Scarborough — a place where we, the fingers and knees behing Ruckus Readings, can personally verify that he is universally adored and admired, since we have been there, and in fact, still continue to go back. Moreover, it is in large part the infectious passion and enthusiasm Professor Tysdal brings to his teaching, his willingness to support and be excited about any and (almost) all of his own and his student's creative whims that led us to believe that it would be reasonable to actually act on a half-baked idea that, hey, it might be fun to start our own reading series! Professor Tysdal has single-handedly brought to life a thriving community of writers in the short time he's been positioned at the university: he facilitates a weekly creative writing group in his office; he runs an annual creative writing competition; he runs a self-explanitory event called Poetry Idol; he runs Sound Poetry workshops and organizes writerly trips to the AGO; he has successfully lobbied to have Creative Writing turned into an official Minor program at the UTSC campus; and, above all, he has a lot of really, really fantastic hair.

Actually, what we haven't yet announced is that Ruckus is teaming up with Professor Tysdal to present to you a prologue of sorts to our upcoming event on July 28th. Starting at 5 PM, Ruckus and The Only Cafe will be hosting an additional reading, featuring the winners of the UTSC Creative Writing Competition in 2012 and 2013. More information and the facebook event for this part of the evening can be found here. (Knowing many of these authors and their writing personally, we can say with certainty that it will be worth your time and bus fare to come to this event.)

But back to Tysdal. Luckily for you, and for us, Tysdal is known to bring all of the above mentioned talent, enthusiasm and energy to his performances. He has been known to make the mirthless laugh, the heartless cry. If you've never had the privilege of hearing him read before, you're in for a treat. No spoilers though: you'll just have to come out and see for yourself! We're so certain you'll enjoy yourself though that we can guarantee a refund of your free admission if you're unimpressed. That's right. You can hold us to that.

And now, we present without further delay (except perhaps to excitedly squeeze in one last minute interjection to excitedly report that Daniel is our only reader yet to have his own Wikipedia page), an interview with Daniel Scott Tysdal.

1) To give people who have never experienced your work before an idea of what they’re getting themselves into (and in the cinematic spirit of ‘famous sequels’), riddle me this: If your body of work was a Hollywood movie, what would it be about, what genre of film would it be, and who would star?

Actually, my work has already been translated into movie form by Canadian independent filmmaker, Grimm Lines. Lines created his provocative, four-hour epic, The Wizard of Now, by digitally combining MGM’s take on Dorothy’s trip down the yellow brick road with Willard’s search for Kurtz in the jungles of Vietnam as documented by Coppola. The film’s a trip: flying monkeys drop napalm on Munchkinland, a massive tornado strikes Saigon, and Martin Sheen absolutely nails “Somewhere Over the Rainbow.” In the end, Dorothy assassinates Kurtz as the locals sacrifice the Cowardly Lion. Willard reaches the Wizard, only to be shown by Oz that he already always was a faithful Judas. There used to be clips on YouTube, but it looks like the Hollywood suits yanked them again. I know Lines has had a lot of problems trying to screen the thing. Lawyers breathing down his neck and what not. I did manage to track down the poster, though. (See below.) 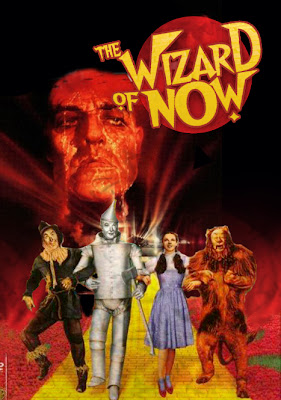 2) And (most importantly), what would its 80s-action-blockbuster style tagline be?

The Wizard of Now had two taglines: “There’s no place like horror” and “You must make a friend of home.”

3) Can you identify when it was that you really began to write (seriously or otherwise)? Was there anyone or anything that inspired you to start writing?

I had the good fortune of attending an elementary school and a high school that encouraged creative writing right from the start. (We even had a cool filmmaking class (shout out to Mrs. McIntyre) in grade eight (Lindale Lions! Represent!). I remember in grade two we’d get a piece of paper with the image of a season/holiday-related icon: a pumpkin, snowman, Easter egg, etc. There were lines inside the icon, where we could print our stories (in that creepy, serial killer-esque hand of little kids). The only piece I remember writing is “Frosty the Snowman Gets Divorced.” In true spirit of Christmas, Frosty is eaten by a boa constrictor (which, if memory serves, is what almost happened to Baby Jesus).

4) Now that you’ve gotten a little older, are there any themes or images you find yourself coming back to? If so, what are they, and why do you think resonate with you?

There are a number of themes, images, and strategies that I keep coming back to (intentionally and unintentionally): loss, mediation, billowing figures, the landscape of the page, to name a few. However, what’s really been resonating with me lately is the writing process itself. I think this has to do with a number of things. For one, I’ve been trying out a whole whack of new forms, practices, subjects, and this has really inspired an attention-spurring and process-addicting sense of wonder and awe. Teaching is a big part of it, too. I’ve been teaching a full load for a few years now, so my writing time is rarer and more precious. Teaching has also given me the chance to delve into discussions and acts of practice with a whole bunch of very keen and cool burgeoning writers. Always an invigorating experience.

5) In the works of other authors, are there any particular subjects or styles you are drawn towards? For that matter, are there any writers who you specifically admire?

My favourite writers are the writers who enthral and transform and surprise their readers with a firmness and breadth and originality of voice and vision. I could write a list that runs on to always, so instead I’ll just say this: I love writing that does whatever the hell it is that Don DeLillo does in the opening section of Mao II and the last few pages of Underworld.

6) Moving away from written work for a moment: what sorts of things do you do when you’re not writing?

My second love after writing is definitely the cinema, both the movies and the theatre experience itself.

I would pair up David Foster Wallace with this cocktail (can’t recall the name) I recently had at a lounge called The Chandelier in Vegas. I believe the cocktail was tequila-centred, but the kicker was that it came with this little, sort of fuzzy berry (“from Africa,” to quote the bartender). You start by chewing on the berry, and using your tongue to rub it all around your mouth. Within a minute, your tongue is completely numb (I mean, like, you-can-no-longer-form-consonants-numb), and your task at this point is to sip the drink slowly. As your mouth gradually un-numbs, the cocktail takes on completely new dimensions of taste and general sensuousness. This cocktail pairs perfectly with Wallace’s fiction and essays because his work has the exact same effect: as you sip and re-sip Wallace, you uncover new (often in-tension) dimensions of insight and emotion and aesthetic highs forming where his words and your world converge.

8) Can you give us a little written trailer of what you’re going to be reading on July 28th?

How about a radio promo instead of a trailer? Old classics, and new hits!

9) Last question: give us a short (less than 75 words) third-person bio blurb about yourself which covers any awards/distinctions you're proud of and what you're tackling right now.

Daniel Scott Tysdal is the author of two books of poetry, The Mourner’s Book of Albums (Tightrope 2010) and Predicting the Next Big Advertising Breakthrough Using a Potentially Dangerous Method (Coteau 2006). Predicting received the ReLit Award for Poetry (2007) and the Anne Szumigalski Poetry Award (2006). His poetry textbook, The Writing Moment: A Practical Guide to Creating Poems, is forthcoming from Oxford University Press. He currently teaches creative writing and English literature at the University of Toronto Scarborough.
Posted by KFY at 1:02 PM