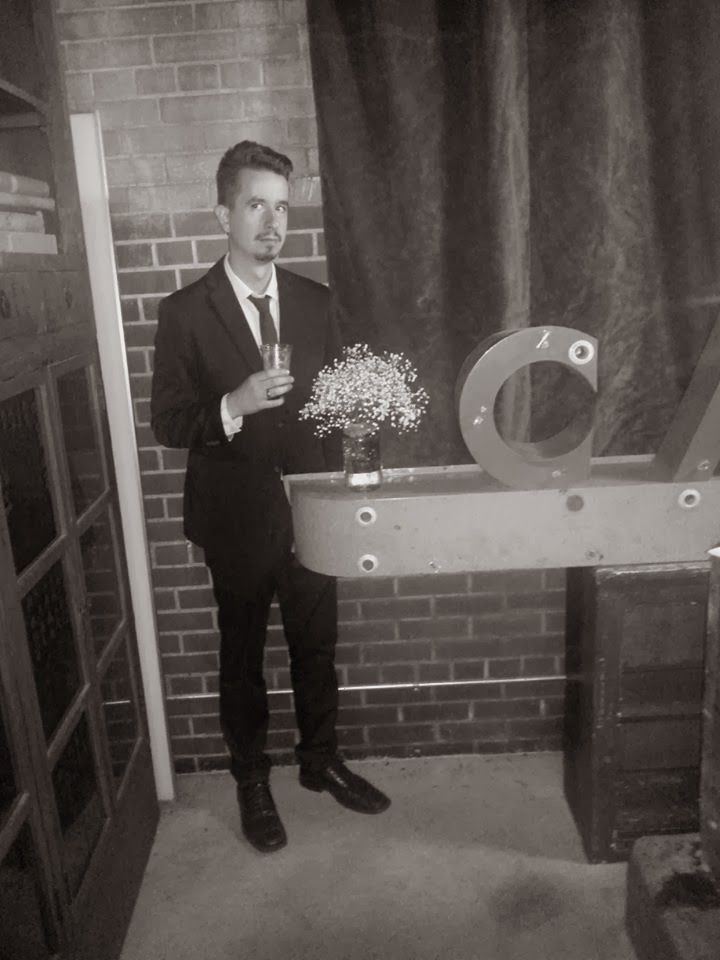 Should you ever cross paths with writer/editor Spencer Gordon during your travels around Toronto, the first thing you'll notice is that the man is sharp. He is intelligent, he is well-read, and he takes pride in his work — no matter what the subject matter is.

Spencer's highly-lauded collection of short stories, Cosmo, is like reading Brief Interviews with Hideous Men scrawled into the margins of People magazine. His technical ability is never in question while you read through the tales, and there's a palpable delight evident on the page as he cuts to the unlikely emotional hearts of situations and characters you may never have considered in the same way.

Operation Smile, the collection's opening story, crafts a compelling portrait of the woman behind the Miss USA sash, exploring the immense pressures and considerations of chasing perfection in the public eye. Lonely Planet is an incredibly sad story, which is impressive, given that it deals with an aging porn star filming a dinosaur-themed scene in full costume. Journey to the Centre of Something is quite probably the most fantastic story starring Matthew McConaughey that you'll ever read, drawing easily on magical, dream-like elements which come together to create a narrative as unusual and riveting as Spencer's take on McConaughey himself. Spencer also sets aside a few stories to flex his sheer writerly muscle: This Is Not an Ending is a bleak, slow-burning fictionalization of the OC Transpo shootings in 1999; Jobbers is a crushing story about wrestling and family that was our personal favourite in the collection, and one that will stick with readers for years.

It's not for nothing that Cosmo was awarded CBC's Overlookie Bookie Award for "Most Underrated Canadian Book" in 2013: the collection is as energetic and fun as it is tragic and moving. Also, there is a story about Leonard Cohen resorting to writing jingles for Subway restaurants as a means of solving lingering money problems. So, yeah —it's perfect.

[If you're interested in picking up Cosmo — and you should be — it can be found here.]

A man of diverse talents, Spencer has his creative fingers in lots of different literary pies around Toronto, and odds are you've heard of at least one of his projects before. He is co-founder and co-editor of The Puritan, the online journal that just released a new issue. He is also co-founder and co-editor of the Ferno House micro-press, which has published anthologies and chapbooks from Andrew Faulkener, Mat Laporte, and Shannon Maguire, among others (including himself — his poetry chapbook Look Good, Feel Great, Have a Blast! was released last year, and was nominated for the 2012 bpNichol Chapbook Award). He teaches at both Humber and OCAD. Plus, he's been published in journals like CV2, Broken Pencil, and Joyland.

He kindly answered a few questions for the blog, even though we broke his fifth rule of interviewing authors. (Sorry, Spencer!) To his credit, his answer to question number four is basically the single best description of how readers would ideally feel ever. We're going to get it framed and put it up on our wall. Check it out below.

Spencer Gordon: A Cult of Personality, and Making the Giller Longlist.

1) To get the ball rolling: For any audience members who have never had the chance to read your work before, how would you describe it? (For bonus points: on this month’s theme of ‘natural forces,’  what would the weather forecast be on the day your work is being read?)

I try to write differently in each story, poem, or longer piece that I’m working on, making a succinct summary of “what it’s like to read my writing” difficult, at least for me. I’ll summarize what other people have had to say, in a series of arbitrary adjectives from positive reviews of Cosmo: “spritely,” “affecting familial realism,” “absurd vision quests in celebrity,” “experimental palate cleansers,” “brave,” “Mariah Carey-esque range,” “vigorous,” “charming,” “media-besotted,” “deliri[ous],” “refreshing,” “startling,” “rare.” High energy? Depressing? Funny? All over the place, right? I guess the weather would be similarly changeable, from annoying sleet to glad sunshine, muggy humidity to frigid cold. In other words, wake up!

2) Can you remember the first time a writer's work really reached out and grabbed you? If so, who were they, and what about their writing caught your attention? Are there any elements of it that you still find yourself chasing, in some way?

Everything I read as a child reached out and grabbed me, as you put it. I had no filter! So I was probably reading The Chronicles of Narnia or The Lord of the Rings or something. As for chasing these writers and works, not really. Dungeons & Dragons is always available.

3) In your own work, are there any themes, images, or characters (etc.) that you find yourself drawn to, intentionally or otherwise? What are they? Why do you think they resonate with you?

It’s all intention! Don’t let them tell you otherwise. I am drawn to extremely lonely people with incommunicable interior worlds. I am drawn to the contrasts between surface and reality, outward masks and personal pain. I am drawn toward the zeitgeist. Obviously this means pop culture, celebrity, wealth and fame and beauty, resolving the pulls of mass culture and supposedly nobler pursuits. I also like to play with scaffolding, the assumed frameworks of narrative, as much as I like to write traditional pieces. To explain why these things resonate me would involve many hours of psychological profiling.

4) If there's one thing that you'd like people to feel when they read what you’ve written, or something that you’d like them to take away from your writing, what is it?

Here’s the basic rundown: first, I’d like people to weep and wail in joy and sorrow over how heartbreakingly affective my work is. Then I’d like them to swell with such immense and obsessive sexual and emotional desire for me that they beg to become my slaves, living for my occasional attention, my passing interest, my spanks. Then I’d like them to go out into the world to recruit more disciples to my cult of personality. Their lives changed, utterly. Then I’d maybe make the Giller longlist.

My favourite descriptions of drinking can be found in various Hemingway novels. First it was the ‘giant killer’ (absinthe) in For Whom the Bell Tolls. Then I came to love the way the partying Spanish villagers squirt the bags of warm red wine down their throats in lustful exuberance and delirium in the streets. Inebriation and poor decisions and rosy glows (isn’t it pretty to think so?) are very important to Hem (there are whole academic essays on the subject), so I suppose both getting fucked up and reading Hemingway go hand in hand.


Note: I also believe you should be over 25 to read Hemingway because you will appreciate the better things in his work and avoid being a total asshole in your Romantic Youth.

6) Last question: give us a short (less than 75 words) third-person bio blurb about yourself which covers any awards/distinctions you're proud of and what you're tackling right now.

Spencer Gordon is the author of Cosmo (Coach House Books, 2012), winner of CBC Books’ “Underlookie Bookie Award” for Most Underrated Canadian Book and noted as one of CBC’s “Writers to Watch” for 2013. He is the author of the poetry chapbooks Feel Good! Look Great! Have a Blast! (Ferno House, 2011), shortlisted for the bpNichol Chapbook Award, and Conservative Majority (Apt. 9 Press, 2013). He’s the co-editor of the online magazine The Puritan and of the Toronto micro-press Ferno House. Look at his shit at www.spencer-gordon.com.

2) Which artist, living or dead, would you meet for lunch?

3) Which Toronto restaurant would you take them to?

I’d take her anywhere she wanted—I’d even eat meat! But being realistic, I’d probably decorate my apartment as a restaurant and tell her it was a really trendy wine bar. (Hi, Steph!).

4) Most underappreciated novel/short story out there, in your opinion?

Let’s stick to Canada. In a Canadian context, the works/short stories of Douglas Glover and the novels of Tony Burgess. They are largely underappreciated. Not saying they aren’t appreciated in some way, but I am saying that they deserve more than what they’re given, especially by our absurd prize culture and lame-ass Conservative Majority Critical Culture. Lynn Crosbie wrote the best novel/memoir in 2012, so where is her medal? In Canadian poetry, I would throw in my friend Nathaniel G. Moore because his poetry collection Let’s Pretend We Never Met is fantastic and wasn’t reviewed or covered near enough (his new novel, Savage, appears this fall). I’d also say the books of Jim Smith, who is a dynamo. Also: my whole new world order stable of Ferno House poets: Mat Laporte, Liz Howard, Fenn Stewart, Shannon Maguire (also a BookThug poet!), Jimmy McInnes, Ben Ladouceur, Andrew Faulkner (author of Need Machine from Coach House), David Brock (upcoming Wolsak & Wynn poet!), etc. These are all young and up-and-coming poets who will make you dance.

5) Any chance you’ll give us a little hint at what you’ll be reading on the 25th?

I’ll probably be reading poetry. My poems get small gratifying pops and my fiction is big and hard to perform in short amounts of time, leaving me feeling like no one has had a good time. I’ve also got a new chapbook of poems coming out soon from Ottawa’s fantastic Apt. 9 Press and I’d like to share it with you dinguses.

Spencer Gordon is a Toronto writer, editor, and educator. He holds an MA in Creative Writing from the University of Toronto, and he has a great haircut. His second chapbook, Conservative Majority, will be released this fall with Apt. 9 Press (and we can't wait). Should you wish to help him start that cult of personality he mentioned, you can tweet him (@Spencergordon), or visit www.spencer-gordon.com.
Posted by Kris Bone at 12:13 PM