Nicole Chardenet: Not Safe for the Taliban. 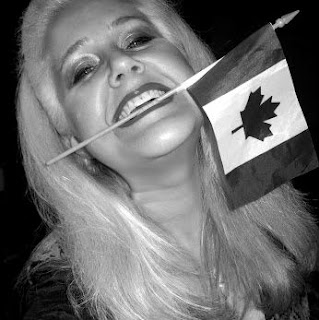 If Nicole already looks familiar to those of you who have previously attended a Ruckus Reading, you may know her as Marlon Brando. At Ruckus Readings Vol. II, she was the lucky volunteer who gave an electrifying turn as the heartthrob actor after composing a poem at the behest of reader Daniel Scott Tysdal. And if you didn't get a chance to catch that, then you're still in luck: she will be reading for us from her newest novel this Sunday.

Nicole, we are pleased to report, came over to us here in Canada from the dark side (To readers who may not immediately get that: I mean America. (To our American readers: ha ha ha just kidding.)) In 2005, Nicole moved up North to Toronto. She "likes to tell conservatives it was all for the socialism but really, it was for better beer."

Either way, we're lucky to have her. Nicole describes herself as a "humorous fantasy author," and it only takes a quick peek at either of her novels to get a sense of what that means. "Zany" might be a good way to describe Nicole's trademark sense of humour. It's on the edge of pop culture, it's fun, it's guffaw-worthy - and it's so much more than that.

Nicole's first novel, "Young Republican, Yuppie Princess," is the tale of a right-leaning, all-American gal and her three Dungeons and Dragons-loving friends (how embarrassing), who have to brave a pseudo-medieval alternate universe in order to rescue a proverbial damsel in distress. It ain't all fun and games, though: black magic, swordplay, and a "stupid prince who sounds like DeNiro on steroids" aren't making things any easier. Ye shall laffe, ye shall crye, ye shall love "Young Republican, Yuppie Princess!" [ED.'S NOTE: No, we're not sure if that was supposed to be medieval, either.]

Her most recent work, "Sumer Lovin'" (And yes, that's Sumer, not summer - think ancient Sumeria) comes to us courtesy of Deux Voiliers Publishing, and brings the fun a little closer to home with a story set in Toronto. When a strange earthquake hits the city, things start to change - and not in a "new bike lanes" way, either. All of a sudden, a fountain of youth pops up downtown, portals to the underworld are opening up faster than new sushi joints, a gorgeous woman is stalking and seducing Toronto's virgin men (with horrifying consequences), and a Jewish matchmaker from New York has to help solve everything. And if you want to find out how, well... you'll have to read the novel.

If you want to know more, you have a few options: Miss Chardenet, who we can personally attest is a pleasure to meet in person, also has an excellent personal website where you can learn more about her, buy her books, or meet Belladonna, her partner in crime/henchkitty. She can be found on Twitter (@Nchardenet), Facebook, LinkedIn, or.... you can just read the interview below.


Right out of the box, tell us: how would you describe your writing to someone who hasn't ever read it before? (For bonus points: if it came with a safety warning, what would that warning be?)
I write humorous fantasy fiction, particularly for folks who are tired of fantasy fiction. In the process I like to take pokes at everyone and everything. In my first novel, Young Republican, Yuppie Princess, I had a go at ‘80s yuppies and Young Republicans, not to mention having some fun with all the stock characters of your average swords ‘n’ sorcery novel. Like a prince who's a total dirtball (kinda like Prince Humperdinck but not nearly as refined), a witch who’s a Goddess-worshipping feminazi – take that, all you ‘feminist’ historical revisionists who write silly, unhistorical books about alleged ancient matriarchies and Goddess worshippers!), a wizard who’s also a heavy metal aficionado (yeah – WTF?!?! There’s an explanation) and Conan-style tribal warriors, except only half as smart or good-looking. In Sumer Lovin’, my most recent novel, I brought the story to modern-day Toronto, the most romantically-challenged city in North America, as we follow several characters in their search for love (and occasionally lust), complicated by a band of demons and other bizarre denizens of ancient Sumeria who are released onto the relentlessly normal city from the Underworld via an earthquake.

Along the way I have my wicked way with Americans, Canadians, New Agers, women-hating men, men-hating women, and the city of Toronto, which is a wonderful place to live but in the immortal words of Jack Nicholson's Joker, “What this town needs is an enema!

Can you remember the first time an writer's work really reached out and grabbed you? If so, who were they, and what about their writing caught your attention?

The first author for whom I became a rabid fan was Dr. Seuss. Loved the stories, loved the whip-quick rhymes, loved most of all the outrageously fantastical illustrations and environments. What kid wouldn’t fall in love with fuzzy trees, castles and buildings on tiny little hills defying the law of gravity (not to mention local building codes!) and anthropomorphic creatures who wanted to be your friend? Was there any awesomer birthday celebration than in Happy Birthday To You!, especially that wicked cool fountain the birthday boy dove into, in his birthday suit? How ‘bout all the cool pets you could have in One Fish, Two Fish, Red Fish, Blue Fish? Or the trouble Horton goes through to save his Who? I still secretly jones for a Collected Works of Dr. Seuss collection. Santa...?

In your own work, are there any themes, images, or characters (etc.) that you find yourself drawn to, intentionally or otherwise? What are they? Why do you think they resonate with you?
I will steal take inspiration from just about anything. I have wide and varied interests so I will beg, borrow, and st--er, acquire--from anything that strikes me as odd, unusual, interesting or funny. I've been a practicing Pagan (I hope to go pro some day) for more than twenty years and I decided to put all that weird arcane knowledge to good use, so you will find many paranormal or occult themes in my novels. I love Toronto, having lived here for eight years, so I like to feature well-known locations around the city. Toronto's got a well-deserved reputation for being a bit tightassed, which is why I greatly enjoyed sic'ing a red-hot drop-dead gorgeous ancient hellbabe on its hapless population in Sumer Lovin'.

If there's one thing that you'd like people to feel, or to take away from your writing, what is it?
A really good laugh. Including several really guilty chuckles that make you think, as a Canadian, you’re probably going to hell for that, because I said something that might piss off (or, 'offend) some overly-P.C. Canadian somewhere. I’m not afraid to say what’s on my mind and I know I often say things that other Canadians privately think but don’t want to say out loud because they don’t want to take the caca for it. For example: I spoofed First Nations land claims and protests with a band of ancient agitators downtown who emerge from the Bank of America building, and their uber-lefty overly politically-correct defenders. I do support Native rights, of course, like every good Canadian, but it's near-impossible to have an adult conversation about Native issues with white guilt-ridden so-far-to-the-left-even-Fidel-Castro-can’t-see-you Canadians shrieking about how Natives have suffered and residential schools and blah blah blah. Yeah, we all know the history, can we please talk rationally about the present and the future for once?

Sorry, just can’t help being a bit of a firebrand. It’s the American in me. I’m still kinda new to this Canadian thing, having been here for only eight years and a citizen for about three months. It’s still easier for me to offend than to be offended. I’ll have to work on that.

Just for fun, give me a pairing: one of your favourite works/authors and one of your favourite beverages (alcoholic or not). Why do they go together? How do they complement one another?
THAT'S OFFENSIVE!!! Oops, sorry, was just practicing being a Canadian. Let’s see, I’m a big fan of David Copperfield, which no one actually forced me to read, and I have also developed a taste for flavoured martinis, and that’s all Canada’s fault because in the States I had to drive, not that I had much surplus cash to drink with anyway. I’m not really sure how martinis are like David Copperfield, except that they’re rich and flavourful and David Copperfield eventually did well for himself and no one can argue that his novels aren’t chock-full of well-drawn, wickedly memorable characters, like the chronically ‘lorn widow Mrs. Gummidge, or the eternally optimistic Mr. Macawber, or Dumb Dora, or sweet, noble, gentle Agnes, or Tommy Trammell with his ridiculous hair. So, of course, chocolate martinis are memorably chocolatey, and sour apple martinis are teeth-on-edge delightful, and fruity martinis are tropically adventurous, and cosmopolitans make you look like one of those Sex & The City wankers.

Then again, David Copperfield won’t make you fat or so drunk you do something majorly embarrassing in front of your boss and all the senior managers at the office Christmas party, so really, you’re better off with David Copperfield.

Any chance you'll give us a little hint at what you'll be reading on the 25th?
I'll be acting out a scene from Sumer Lovin' in which Lamashtu, an ancient Sumerian demi-goddess and reigning hellbeast, attempts to seduce a 35-year-old virgin on a park bench in Nathan Phillips Square. Expect some faux semi-nudity (sorry, you'll have to attend to find out what 'faux semi-nudity' really means). Daniel Tysdal, who performed his own piece at the July Ruckus Readings, and who appears to have not a shred of inhibition, has agreed to play my aging virgin. And my friend Gord Jeoffroy will read some of the narration.

Last question: give us a short (less than 75 words) third-person bio blurb about yourself which covers any awards/distinctions you're proud of and what you're tackling right now.
Nicole Chardenet doesn't submit her work for many awards because she's afraid if she wins the Giller Prize people will think it's really literary and therefore it's gonna suck. Like a novel with a Mesopotamian nympho has a shot at the Giller, but whatever. Her next novel will also smite Toronto with sexual paranormal weirdness, so be forewarned.